In addition to famous monuments and historical sights, there are some interesting places in Kiev appeared recently. One of the most remarkable places in the city, moreover, is not mentioned in guidebooks yet  Kiev art sightseeing – The Landscape Alley.

The history of this place is remarkable in itself. Long time ago, officials of the Ministry of Foreign Affairs  (MFA) have decided to build a «house,» in the area. A «modest» house, as possible, and as expensive, as possible, for their needs.Do you know where «the history of the Rus land» started? Here, on this hill you can see the foundation of the oldest Desatynaya Church. Here was the Kiev center in times of Vladimir Svyatoslavovich. Well, the Ministry Foreign Affairs received a building permit, easy business for bureaucrats … Residential building with two-level underground parking on millennial secular occepation layer.

This case took plaсe 2004. All permissions are obtained, all bribes have have been distributed. Just about public opinion have been neglected. But citizens were mad. Public organizations and simple residents, still remembered the «Orange Revolution» and tents camp in the Kiev center. Armed with crowbars and slogans and. took with them and the journalists, they went to demolish the green fence. The fence was destroyed and brought to the building of the Ministry of Foreign Affairs. New fence have appered again soon. And again… Real battle with privat guards, and state police (called Militia in Ukraine) started…

Amusing sculptures helped to put a comma in the dispute. At the place of future building, in a short time, a playground of stunning beauty have been created. Now this place is in constantly focus of attention, and despite all courts decisions, build anything on the famoust playground site, with no serious opposition is complicated. But to walk and to take pictures at the Landscape is now pleased. That’s the most interesting site to take a foto in Kiev among  modern attractions.

It is not only a great example of landscape design and other sculptural beauty of Kiev. It is an example of combining brute force with art standing up for the rights. Every now there are mentions in the news that the MFA still intends to build their building.

Landscape Park is constantly updated with new unusual sculptures and mysterious characters. Recently here appeared a slide in Alice in Wonderland style. Landscape Alley will give a lot of  perfect photo-stories, often  with philosophical content. 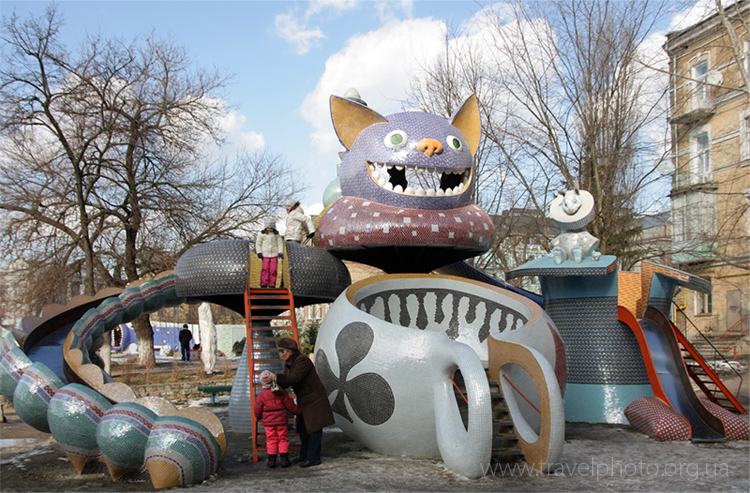 Hedgehog in the fog, and other strange sculpture in Kiev

In addition to Landscape alley, Kiev is full of other strange sculptures. The best-known character of the city can be called Hedgehog in the fog sculptere. Hedgehog, by the way, is made of wood screws and wood. Kievan  hedgehog is located at the intersection of Zolotovorotskoy and Reitarskaya streets.

In addition to Hedgehog, in there is our city a monument of Flying Cow ( Olesa Gonchara street), a Cat made of disposable forks (metro station «Golden Gates»), Street lamps in love (metro station «Independence Square»), Donkey (Rilskogo lane), Ballerina (the intersection of Stretenskoy and Streletskogo streets), and even a Burnt Match (Artema street, 24). Just come to see them in person, you will not regret. Something has already disappered. For example, here’s the picture in Andriyivsky descent that «prevent» someone during renovation.

Have you noticed mistakes in English version? It will be great, if you specify them to me.

Do you have any questions about Kiev? I am happy to answer.